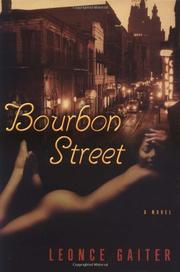 A seen-it-all gambler called to a high-stakes poker game in 1958 New Orleans finds instead murder, betrayal, and a lost love in this murky, brooding debut.

The staff at L’Hotel Moreau wastes no time putting Deke Watley in his place. The disfigured desk clerk stares boldly as he indicates how much he knows about him; the bellhop who carries his bags pulls a gun on him. Alex Moreau, who manages the hotel for his blind father, is playing for even higher stakes. He tells his dealer that Mr. Watley is to win, for now, and so it happens. But poker is nothing more than a front for Alex’s real plans. He wants to kill the father who murdered his mother, the black islander who’d blinded August Moreau. And when the elder Moreau sends retired private eye Harry Tate to trail August’s mistress Hannah, and Tate follows her to a meeting with Deke, the onetime lover who’d left her high and dry back in Texas, Alex sees his chance. He kills Tate and ropes Deke into the murder, telling him they’ll have to move quickly against August before he strikes back. The ensuing cycle of Mardi Gras bloodshed is set forth in prose by turns as grandiloquent as Faulkner and clipped and stylized to a fare-three-well.

The result is a gusty, somber mood piece the cast is powerless to stop from unfolding because “not enough people were dead yet.”