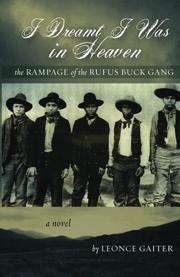 I DREAMT I WAS IN HEAVEN

The Rampage of the Rufus Buck Gang

A grim, gritty historical novel set in and around Arkansas’ Indian Territory during the last decade of the 19th century.

Gaiter (Whites Shackled Themselves to Race and Blacks Have Yet to Free Ourselves, 2017, etc.) revisits the story of the brutal Rufus Buck Gang—a collection of Native American, mixed heritage, and black teenage boys seeking personal glory and revenge for the mistreatment of Native Americans. The gang has just been captured after two weeks of rape, murder, and torture. The townsfolk of Okmulgee want immediate vengeance, but the boys are taken to Fort Smith, Arkansas, where they will be tried in front of Judge Isaac Parker. Parker will go down in history as “The Hanging Judge,” and this will be his last trial. He is sick and tormented by what he perceives as his failure to “civilize” the territory. He also knows he is partially responsible for enabling a meeting between the young Rufus Buck and Buck’s idol, “Cherokee Bill,” a Native American outlaw sentenced to death. Rufus spent his adolescence reading dime-store novels about Bill’s exploits. The narrative winds its way back and forth, giving some backstory about each of the gang members, with most of the attention devoted to Rufus, the delusional leader. Gaiter adroitly intertwines the personal stories of Rufus and his cohorts with the larger narrative of the cruelty perpetrated against Native Americans. Rufus is scarred by his father’s disillusionment after he watched the Cherokees sell off their land, and their heritage, in exchange for small individual payouts and worthless promises: “To Buck, that was like buying a house and splitting the money evenly between the man, his wife, and each child and telling them all to go their separate ways.” He knew the same would happen to the Creeks. Skillful prose depicts white Americans’ pervasive bigotry and the methodical destruction of Indian sovereignty. Unfortunately, the novel contains not a single likable central protagonist.