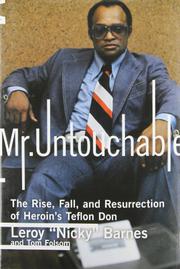 A generation ago, Nicky Barnes was notorious as Harlem’s prime retailer of quality heroin. Now he tells his gripping story.

Of course, it must not be the whole story, but what there is smacks of attitude. It is a chronicle of Barnes’s thug life, complete with his crew, his women, his warriors and his enemies on both sides of the law. It’s low life living the high life, tax-free, with lots of freaky sex, many penthouse apartments, pricey cars and heavy bling before it was called bling. Barnes was featured in a lead piece in the New York Times Magazine and inspired the hit “Bad, Bad Leroy Brown.” Back in the day, he says, the city was his. Learning from the mob, he formed a Council to manage the distribution of drugs and eliminate any DEA snitch who was fingered by his potent counterintelligence. We learn, in pointed language, of booze, weed and guns. The ways of each mo-fo and of every ho is sharply etched. Eventually, his “continuing criminal enterprise” collapsed. (Insufficient family values, Barnes supposes.) The author went to federal prison and when he couldn’t run the Council (or his women) from the joint, he destroyed it (and them). Now, still proud of his superior intelligence, he is in the witness protection program. His fierce text says virtually nothing of the effect of his enterprise on the customers he supplied. That isn’t a concern in this brutal, scorching book.

The tale of a crime lord that’s as vicious, graphic and entertaining as anything out there today.