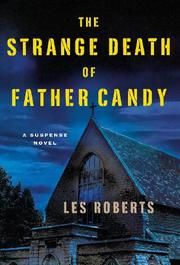 THE STRANGE DEATH OF FATHER CANDY

In 1985, a hardened Vietnam veteran who’s settled in Chicago returns to Youngstown, Ohio, where he grew up and his priest brother has just committed suicide.

“I can’t really say I have a passion for anything,” Dominick Candiotti tells a newspaper reporter. Wrong. He’s passionate enough about Diane Burnham, the old college flame now married to an attorney, to burn up the sheets with her again at the drop of a hat, and passionate enough about his brother Alfonso, a diffident Youngstown police lieutenant, and his sister Teresa, a do-nothing whiner, to quiz them mercilessly about the apparent suicide of their brother, Father Richard Candiotti. Mainly, though, he has a passion for justice. First he tries to find out the truth about the much-loved Father Candy’s death by making the rounds of the mourners at his funeral, with special attention to members of the Severino family, who run the rackets on the west side of town, and their rivals, the Mangione family, who owe their loyalty to the Pittsburgh mob. When his barrage of questions finally moves someone beyond annoyance and dire warnings to a Youngstown Tune-Up—a fatal car bombing—Nicky goes into vigilante mode. The results, depending on your tolerance for torture and violent revenge, are either exhilarating or sickening. In a town in which “everyone I knew was connected in one way or another to mob crime and civic corruption,” it’s inevitable that there’ll be lots of casualties as Nicky implicates almost every citizen in Youngstown en route to an anticlimactic showdown.

A feast of vengeance served piping hot that’s quite a departure for the generally more reflective creator of Milan Jacovich (The Irish Sports Pages, 2002, etc.).