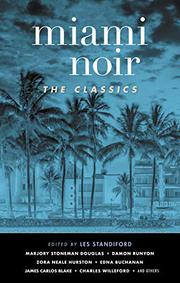 Nineteen classic tales of gloom from the Sunshine State.

Although the stories, all of them reprints, are grouped thematically into four sections, they’re arranged chronologically, and their development over the 90-plus years they span is startling. In Marjory Stoneman Douglas’ 1925 “Pineland,” Miami is largely rural, even wilder in its landscape than the orderly groves of Orange County, which its pioneer heroine abandons for the pine forests further south. Nature is also the greatest threat in the excerpt from Zora Neale Hurston’s 1937 classic, Their Eyes Were Watching God. But in Damon Runyon’s “A Job for the Macarone,” written the same year, people are the authors of their own doom. They lie, cheat, and double-cross each other, and they go right on doing so in Brett Halliday’s 1944 novella, A Taste for Cognac. By the ’70s and ’80s, the focus begins to shift to political and social ills. The Cuban migration serves as backdrop for an excerpt from Douglas Fairbairn’s “Street 8,” and Charles Willeford explores predatory sexual behavior among single men in “Saturday Night Special.” The economic angst of the 1990s is highlighted in Elmore Leonard’s “The Odyssey,” T.J. MacGregor’s “The Works,” Lynne Barrett’s “To Go,” and editor Standiford’s “Tahiti Junk Shop.” And as the 21st century dawns, stories like Vicki Hendricks’ “Gators” and Preston L. Allen’s “Superheroes” are markedly more sexualized, and the hardscrabble Little Havana setting of “Street 8” is reinvented as fabulous South Beach in Carolina Garcia-Aguilera’s “Washington Avenue.”

A collection that shows how far a city can come and still maintain a strong noir tradition.