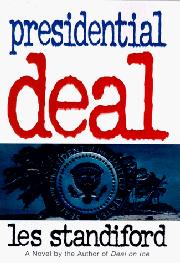 It’s a simple, well-worn formula, but work it well—as Standiford does here—and it’s almost foolproof. The formula: create a sympathetic character or two, put same in harm’s way, maintain pressure for 300-plus pages, and what you get is a page-turner. As just such a character, John Deal, in his sixth outing (Deal on Ice, 1997, etc.), has never been more engaging, braver, more resourceful, or more becomingly modest about it all. For helping to rescue a group of hard-pressed Cuban refugees, Deal now finds himself singled out for a national valor award. It’s to be given at a special ceremony presided over by Linda Sheldon, First Lady of the land. She, too, it turns out, is brave and resourceful. And immensely likable. Before Deal can actually receive his award, however, terrorists interrupt the proceedings. Exactly why is left a bit sketchy: —Chaos is normal,— says one, which is the closest any of them comes to a political statement. At any rate, in surge the terrorists, automatic weapons blazing. Noise, smoke, bodies falling. In the confusion, Linda and Deal are taken hostage together, suffer a variety of cruelties and deprivations, and, through pluck—and some luck—also survive together. Through it all, they inevitably grow to care for each other, and it is this ripening of a special relationship that forms the strength of Standiford’s story. Though not everything happening makes perfect sense, the scenes shared by Deal and Linda are so neatly crafted that suspending disbelief is a breeze. A very good Deal indeed. (Author tour)