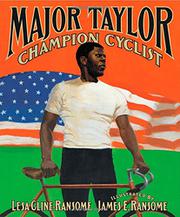 Glorious, light-filled oils are not enough to save this lackluster picture book biography of “Major” Marshall Taylor, the first African-American world-champion cyclist. From his beginnings as a hired stunt rider in an Indianapolis bicycle shop in 1891 to his triumphant defeat of the reigning world champion in Paris in 1901, the text emphasizes his determination and class in the face of prejudice and hostility both on and off the track. It’s an inspiring story, but it never really takes flight. As a subject, Taylor lacks the mythic flair of Satchel Paige, the subject of the pair’s 1999 collaboration, and consequently the narrative lacks snap. Perhaps in an effort to compensate for Taylor’s relative stolidity and to reach out to child readers, Cline-Ransome peppers her text with invented dialogue, an unfortunate choice in today’s world of children’s nonfiction. Ransome’s full-bleed illustrations emphasize mood and form, featuring a muscular, solemn, and almost driven Taylor. An author’s note summarizes Taylor’s life after 1901, discusses the racial climate of turn-of-the-20th-century cycling, and cites sources. (Picture book/biography. 6-10)