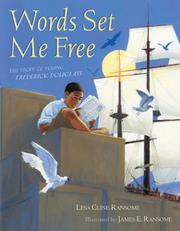 The Story of Young Frederick Douglass

For the enslaved child who grew up to be Frederick Douglass, learning to read led to freedom and a life of activism committed to abolition.

Cline-Ransome has based her story on Douglass’ autobiography, giving the gravitas and formality of the adult to the child. She describes his childhood on a Maryland plantation, including his separation from his mother and the ill treatment he and all the other enslaved children received. Sold to his owner’s relatives, the Aulds, in Baltimore, Frederick Bailey, as he was then known, was taught to read from the Bible by Auld’s kindly wife. When her good deed was discovered by her husband, she was forced to close her library to Frederick. Undeterred, he practiced reading on the streets and along the waterfront. Ransome uses acrylic and oil paints to create a palette rich in the blues and greens of the Chesapeake region. The portrait on the back cover is particularly striking. Husband and wife have been frequent, successful collaborators, and this title is equally commendable. One caveat, though: Ending with Douglass’ successful escape rather than a failed one would have been preferable.

A solid effort that offers young readers a glimpse into the lives of children in the time of slavery and appreciate the development of a most notable life.