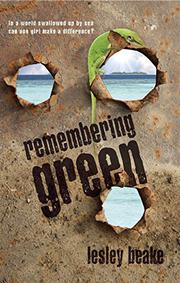 In this sketchy, incoherent, near-future tale, a child named Rain and the lion she has raised are stolen from an inland village for some never-explained Sacrifice by “Tekkies” inhabiting The Island, a former mountaintop surrounded by risen seas. Aside from vague references to “the Wild,” “Drylands” and air-conditioned “chill chambers,” the author does little to set up either the scene or the back story, nor does she ever reveal why Rain or the lion are considered so significant. Instead she focuses almost entirely on Rain’s unhappiness and confusion through disconnected encounters with Island residents, and then she engineers a highly contrived escape for the girl and lion as their former prison is totally destroyed for unknown reasons. The deadly effects of global warming certainly make a cogent theme, but this effort to take it up seems to have been, at best, phoned in by a veteran South African author who usually offers much more careful and sensitive work (Song of Be, 1993, etc.). Goodness knows, there's a raft of other eco-disaster tales out there for readers so inclined. (Science fiction. 9-11)