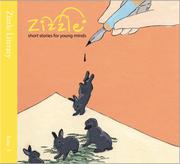 Third in a series, this illustrated collection of flash fiction, edited by Dahl (Zizzle Literary: Issue 2, 2019, etc.), for middle schoolers and up focuses on fantasy and magic.

Zizzle Literary publishes concise, imaginative pieces that both parents and kids can enjoy and discuss. Each of the 10 stories is tagged with its reading level, from “Easy” to “Not Easy.” Magic is the theme of this third issue, whether “outright fantasy” or a more subtle variety, according to the Foreword. The opener, “A Reluctant Fairy Tale,” by Karen Heuler, riffs on elements from childhood classics like “Little Red Riding Hood.” Instead of being helpful and complaisant, the heroine refuses to help an old lady—with at first “delicious” and then more disturbing consequences. In other stories, magic can be delicate and poignant, as in “The Shelter of Abandoned Dreams” by Kimberly Huebner. An old woman works at a shelter that reunites people with their lost dreams. By the story’s end, she’s able to nurture her own adrift dream. Other stories tap into the anarchic energy of childhood, such as “Dead Mudge” by Melissa Ostrom; a teacher’s death in the classroom liberates the children’s vitality and creativity. Magic can shade into the sinister, as in “Uncle Frank” by Wendy Nikel. The title character insinuates himself into a family, but the child narrator knows she’s never had an Uncle Frank. In “Serbian Dracula Mysteries” by Kate Felix, magic takes a turn for the funny and sweet. The story’s puckish narrator, Arsen, is sent to school counseling for his pranks. Amateur detection is meant to be a good outlet for him, but investigating the daytime doings of his attic-dwelling uncle reveals nothing ominous. Instead, his uncle smiles at him “with more admiration than I have ever enjoyed from anyone else in my growly, vampiric family.” The book also includes photos, usually of the authors when they were children, and in a final section, contributors talk about their favorite books from childhood. The stories—strong and graceful—raise issues that children and parents could profitably discuss together. “A Reluctant Fairy Tale,” for example, might prompt questions about why it feels good to be bad, what the consequences are of defying such cultural norms as helping old ladies, or why the narrative seems to both admire Eugenia’s defiance and punish her for it. Genre expectations could be another topic. “Serbian Dracula Mysteries,” for example, takes its horror influences in an unexpected direction, with Arsen reinvigorated, not drained, by his encounter with the unknown. Depending on reader taste, some stories could also invite more critical analysis. For example, is Eugenia perhaps too obviously a stand-in for an adult sensibility with dialogue like, “your false tests, your arbitrary trials”? Adding to the issue’s charm are debut illustrator Moriyama’s lovely, otherworldly rabbit-themed paintings resembling Japanese woodblock prints.