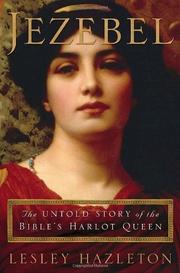 The Untold Story of the Bible’s Harlot Queen

A dogged defense of one of the Bible’s most controversial characters, used to grind a few axes.

Hazleton (Mary: A Flesh-and-Blood Biography of the Virgin Mother, 2004 , etc.) aims to peel back centuries of slander and misconception about the character of Jezebel, utilizing modern archeological evidence, textual criticism and her own Mid-East experience. However, she leaps beyond the realm of biblical criticism to create a character all her own. The author’s Jezebel is a beautiful, proud, cosmopolitan queen, a model of civility set against the rugged milieu of backwater Israel. She is also virtually guiltless, her only fault apparently being a well-earned arrogance as the worldly queen of the uncouth. Hazleton presents Jezebel in such a light largely to juxtapose her to her arch-enemy, the prophet Elijah—who the author palpably, almost viciously, disdains. But Hazleton’s rehabilitation of Jezebel is a secondary aim. Her main theme is what she sees as an ageless struggle between civilized plurality and tolerance on one hand, and destructive fundamentalism on the other. Elijah—who she compares to both al-Qaeda operative al-Zawahiri and Yigal Amir, Yitzhak Rabin’s assassin—is squarely in the fundamentalist camp. The prophet, described as “downright feral,” is the antithesis of Hazleton’s Jezebel, who understood tolerance and statecraft and stood almost alone in ancient Israel against “fanaticism and intolerance.” The implications for today are obvious: “Elijah issues the classic challenge, heard everywhere from Islamist madrasas and hard-line yeshivas to evangelical seminaries: you’re one of us, or one of them.” The author’s attempt to resurrect the reputation of Jezebel is certainly hindered by her own heavy-handed rhetoric. She argues correctly that Jezebel’s name has been used (and misused) throughout time for the purposes of advancing separate arguments. But with this book, she does exactly that.

Jews, Muslims and Christians alike may take offense to Hazleton’s contribution to plurality.