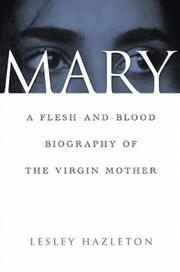 A Flesh-and-Blood Biography of the Virgin Mother

A knowledgeable journalist profiles history’s most renowned Jewish mother, tracing a life barely touched upon in the gospels.

From the beginning, Hazelton (Driving to Detroit, 1998, etc.) asks for trouble. Her first words describe a pregnant, 13-year-old peasant girl clad in a torn linen shift, “short and wiry, with dark olive skin.” Maryam—her true name, the author asserts—probably never resided in the Temple, but she was instructed in the healing arts by her grandmother, a Wise Woman called Salome. (Hazleton takes it as a fair supposition that Maryam passed those arts to her son.) Gingerly approaching the central matter of the Virgin Birth, the author reviews the state of gynecology, the practice of contraception, and the mechanics of parturition 2,000 years ago. Was the doctrine of virginity simply a mistranslation of Matthew’s Septuagint? She thinks not, explaining the conception as a paradoxical mystery of religion, not physical fact. Hazleton skips the annunciation, skirts Matthew’s hint that Jesus may have had siblings, and suggests that Joseph probably acquired his role as Maryam’s consort and the physical dad in order to provide a Davidian lineage for Jesus. From his birth, the text quickly shifts to Maryam at his crucifixion, complete with all the grisly details about that form of execution. Thence to the burial and the resurrection, which “only makes sense on another level of knowledge, one that supersedes the factual.” The facts, however, remain fascinating, while the novelistic suppositions are pure dramaturgy, as uncanonical as the Sibylline Oracles. The biography takes a decided feminist turn as Hazleton ascribes the new religion’s establishment to the women who followed the son of Maryam. This Mary isn’t the blue-robed icon painted by Fra Angelico or the young mother carved by Michelangelo, but throughout it all, Maryam remains full of grace.

Sure to kick up some biblical dust: a graphic, instructional story unlikely to receive the Church’s imprimatur.