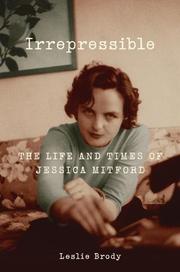 The Life and Times of Jessica Mitford

Born into a life of British aristocracy, at age 12 Mitford wrote a letter to a London bank requesting to open a “Running Away Account.” Her action, even at such a young age, was emblematic of the life she would lead—that of an outsider, an activist and a hot-blooded liberal from a family with fascist leanings. Brody (Creative Writing/Univ. of Redlands; Red Star Sister: Between Madness and Utopia, 2000) gives full access to Mitford's story, from her first marriage to Winston Churchill's nephew, Esmond Romilly, to her migration from the comforts of England to the exploding social scene of New York City in the 1940s. The narrative accelerates as Mitford struggles to find solid footing in a foreign land, and the World War II backdrop intensifies after Mitford's husband is discovered missing in action and presumed dead somewhere in the North Sea. After Romilly's death, Mitford's slide to the political left continued upon marrying Civil Rights lawyer Robert Treuhaft, who encouraged his wife’s passion for activist reporting. Mitford witnessed firsthand the Freedom Riders' beatings in Birmingham, as well as other violent events during the civil-rights movement. Throughout her life, she courted danger while still managing to brush shoulders with royalty. She held chats with William Faulkner and Eleanor Roosevelt, while across the sea, her family dined with Hitler. “Had tea with Hitler,” her mother reported. “He is very agreeable and has surprisingly good manners.” The political differences between Mitford and her family were exacerbated by Joseph McCarthy's HUAC trials, which called upon Mitford and her husband to testify, an indignity that would only further solidify her role as a resilient muckraker long into the future.

A valuable retelling of a provocative life.