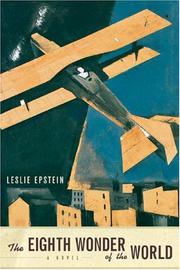 THE EIGHTH WONDER OF THE WORLD

The fate of Italy’s Jews during World War II and the visionary folly of a truculent anti-Semitic genius are the subjects of Epstein’s sprawling, ambitious tenth novel.

The complex narrative juxtaposes three interconnected stories: the memories of aged Max Shabilian during a 2005 return flight to Rome, where he had become the de facto right-hand man (and son-in-law) of maverick American architect Amos Prince; the diary in which Prince recorded his experiences, insights and prejudices; and a chronological account of the rise and fall of Mussolini’s brutal Fascist dictatorship. Epstein’s maze-like approach—which begins with “A Prologue” recounting acts of aggrandizement from the Roman siege of Jerusalem in 1000 b.c. to Mussolini’s 1936 seizure of Ethiopia, and ends with a bitter summary of World War II’s waning days—takes some getting used to. But the story soars as we learn of Amos’s scheme to immortalize “Il Duce” by erecting a memorial mile-high skyscraper (La Vittoria) and realize that he’ll pay any price (not excluding the surrender of his beautiful daughter Aria to the dictator’s lust) to fulfill his grandiose dreams. And the story escalates to tragic proportions when Max (a Jew) conceives a plan to save captive Jews from being delivered to Italy’s ally the Third Reich, only to see it backfire, making him, not the savior he had hoped to be, but “Max the murderer.” Compelling (if sometimes overdrawn) extended scenes vividly portray the accumulating madness, and Epstein offers rich expressionistic characterizations of such startling figures as cantankerous Amos (who combines the worst qualities of Frank Lloyd Wright and Ezra Pound), his Fascist- and Nazi-loving son Franklin, Mussolini’s tempestuous Party Secretary Farinacci and politically savvy Chief Rabbi of Rome Israel Zolli (among many others).

Epstein’s best book since his 1979 triumph King of the Jews—a synthesis of history and imaginative daring, akin to Catch-22 and the encyclopedic historical fiction of Thomas Pynchon and William T. Vollmann.