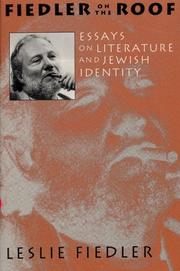 FIEDLER ON THE ROOF

Essays on Literature and Jewish Identity

Elegiac reevaluation by Fiedler, now 70-plus years old, of what it means to be a ``terminal'' Jew, a nonbeliever at the close of a 4,000-year line of Jewish forebears, and how that colors the essays on Jewish-American (Isaac Bashevis Singer) and American-Jewish (Bellow, Malamud, Mailer) authors he's been writing for the past ten years. This is not the firebreathing Fiedler of Love and Death in the American Novel and No! in Thunder, but he does have some fresh ideas in the 12 essays, which appeared originally in journals ranging from Psychology Today to Journal of Modern Literature. All are fairly subjective, tying into his Jewish background, and one—''In Every Generation: A Meditation on Two Holocausts''—is his most intimate writing since 1970's Being Busted. All his European relatives died in the Holocaust. Fiedler himself has eight children, not one of whom is married to a Jew or thinks of himself as Jewish, and his grandchildren have even less idea of their Jewish background—all of which Fiedler views as a ``Silent Holocaust.'' Forty years ago he was the enfant terrible of American criticism, but then, he says, he allowed gentiles—playing up to their post-Holocaust feelings—to give him academic posts that gradually tamed his fire. ``I have shamelessly played the role in which I have been cast, becoming a literary Fiedler on the roof of academe.'' He takes credit for boosting the postwar Jewish literary Mafia (Bellow, Roth, Malamud), now thinks it about burned out and he no longer reads their books. His most brilliant pages speak of Leopold Bloom, the first warm, dark, nonthreatening Jew in Western literature: ``I...had myself to become Bloom before I could understand Ulysses.'' He also has new ideas about the Book of Job, and goes on to show how the Grail Knight, Galahad, fathered by Lancelot with a Jewess, was Jewish, and how the legend itself descends from Joseph of Arimathea, who ran off with Christ's cup after the Last Supper. Passages of academese balanced by open-heart surgery.