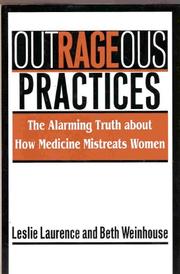 The Alarming Truth About How Medicine Mistreats Women

What could, in less skilled hands, have been a shrill attack is in fact an admirably restrained and thorough examination of how the medical establishment has treated women as patients, as research subjects, and as health care providers. Medical journalists Laurence (author of the syndicated column ``Her Health'') and Weinhouse (a freelance writer for Elle and other magazines) combine solid research and personal interviews (sometimes with well-known individuals and sometimes with women whose identities are concealed) to create a compelling picture of what's wrong with women's health care. They show how medicine has discriminated against women as doctors; has excluded them as subjects in most research involving new drugs, medical treatments, and surgical techniques; and has regarded female patients as second-class citizens. Not surprisingly, the authors look at the surgicalization of reproduction, the lack of innovation in birth control, and the medicalization of menopause. They note that while often overtreated as obstetrical and gynecological patients, women, when they have other complaints, are frequently taken less seriously than men with similar symptoms. Laurence and Weinhouse examine the medical biases that lead to differences in how men and women with heart disease, kidney failure, cancer, and AIDS are diagnosed and treated. Not only do male physicians tend to dismiss women's complaints as psychosomatic, but since women have not been included in most research studies, adequate information is simply missing on how best to treat them. The authors touch all the bases, including sexual harassment of women doctors, the trivialization of women's mental health, the gender bias in pharmaceutical advertising, and the intrusion of the courts into women's personal medical decisions. They conclude with some hopeful signs of change: More women are becoming physicians, and more research projects are including female subjects. Comprehensive analysis, well presented and well documented. (First serial to Ladies' Home Journal; author tour)