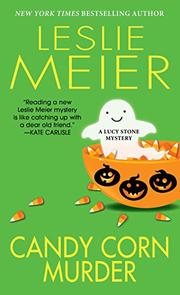 It isn’t as if Lucy doesn’t have enough on her plate. Her son, Toby, and daughter-in-law, Molly, are off studying fish farming in Haiti, leaving her in charge of 4-year-old Patrick. Between Molly’s strict ban on sugar and television and the draconian safety rules head teacher Heidi Bloom has instituted at Little Prodigies preschool, Lucy’s hard-pressed to keep up with her active grandson, who wants to be a ninja for Halloween, when, naturally, all the ninja costumes are sold out. Her husband, Bill, lavishes his affections on Priscilla, the perhaps 500-pound beauty he hopes to enter in the festival’s Giant Pumpkin contest. Bill’s even been paying scruffy Evan Wickes, local jack-of-all-trades, to help him build a catapult designed to win the pumpkin-hurling contest. Still, Lucy tries her best to be upbeat as she covers a wide range of festival events, musing as she does on the creeping commercialism that’s taken over Christmas and now threatens Halloween. She even seeks out an interview with Sam “Buck” Miller, youngest in the line of proprietors of Country Cousins, a Tinker’s Cove institution that provides local residents with everything from polo shirts to tire irons. She also collaborates with former librarian Julia Ward Howe Tilley, now well into her 90s, on plans for Tinker’s Cove’s Take Back the Night Rally as her daughter, Sara, now a sophomore at Winchester College, frets about the erosion of women’s access to reproductive health care.

All this musing and fretting pushes the murder, when it finally arrives, into the back pages of Meier’s 25th, and the solution is barely a footnote.