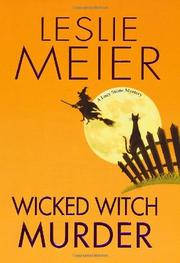 A coven of Wiccans brings murder and mayhem to Tinker’s Cove.

Star reporter Lucy Stone (Mother’s Day Murder, 2009, etc.) has two brand-new neighbors. Diana Ravenscroft owns Solstice, a new purple-painted shop full of crystals, handmade jewelry and books of spells. Ike Stoughton lives on Prudence Path, just across the bridge from the Stones’ home on Red Top Road. So naturally Ike’s daughter Abby makes friends with Sara and Zoe Stone. But while the teenaged girls’ fascination with Diana—known as Lady Diana within the Silver Coven that celebrates Lammas in the local woods—worries Lucy, it enrages Ike, who launches a virulent campaign against the evils of witchcraft. Although Lucy’s boss Ted Stillings preaches tolerance from the Pennysaver’s bully pulpit, Tinker’s Cove residents quickly take sides. Soon fires and flash floods engulf the small community. But even when a tree branch crashes through the roof of her home, intrepid journalist Lucy shrugs it off. She’s focused on local magician Malcolm Malebranche—Lord Malebranche to his fellow Wiccans—who’s found burned to death in the woods. Lucy suspects greed rather than magic, since Malcolm refused to sell his land to mega-developer Kyle Compton. Lucy’s next worry: gentle, eccentric Rebecca Wardwell, whose farmlet Compton’s been eying. But Rebecca and her owl companion Oz have their own resources that allow them to stare down evils from poison ivy to murder.

Rather than offbeat, Lucy’s dalliance with the occult manages to be both weird and pedestrian. It would take more than magic to make Tinker’s Cove a happening place.