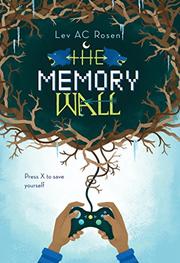 Just as his mother enters a nursing home with early-onset Alzheimer’s disease, a biracial (black and white) seventh-grade boy finds solace in a complex video game.

Nick Reeves hates everything about the day that his white mom goes to be “locked up” at Sunrise House. He’s so convinced that she’s been misdiagnosed that he keeps a log of her Alzheimer’s symptoms, hoping to disprove his parents’ conclusions. His preoccupation with his mother’s status even leads him to choose exploring her roots in East Berlin for a school history project despite the fact that his historian father’s books on the African-American experience would make researching that side of his family a snap. Meanwhile, in his persona as a gray elf treasure hunter/explorer named Severkin in the video game “Wellhall,” Nick encounters an older gray elf, Reunne, who he is convinced is his mother, trying to reveal to him the truth of her past and future. At the game’s memory wall Reunne declares: “This is my family, my history. This is everything I am.” Rosen adeptly explores memory and personal history as well as the loneliness of losing a parent, the complexity of biracial origins, and the metaphors of a quest and a divided city. While the story is occasionally heavy-handed and repetitious, readers—gamers and nongamers alike—will cheer the resolution of Nick’s transformative journey.