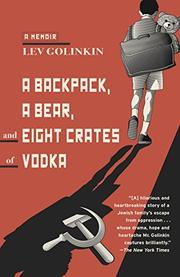 A BACKPACK, A BEAR, AND EIGHT CRATES OF VODKA

An ex–Iron Curtain refugee–turned–American citizen tells the emotional story of how he and his parents fled the Ukraine two years before the collapse of the Soviet Union.

Golinkin was 11 years old when he and his family went into exile. They were among thousands of other Jews seeking political asylum and an end to the anti-Semitism that they and their ancestors before them had been forced to endure. The family was secular; however, that fact did nothing to protect them from harassment and social oppression. The trauma ran so deep that Golinkin developed a severe case of self-hatred that haunted him into adulthood. The family’s path away from the Soviet Union took them to Vienna, where two American Jewish aid organizations assisted them and other refugees in beginning the long process toward finding homes in Israel and the West. The family encountered an Austrian baron named Peter. Driven by anguish over his father's Nazi past, Peter helped get Golinkin’s father a temporary job to rebuild lost work credentials and prepare him for future gainful employment rather than a life condemned to “delivering pizzas and driving taxis.” Eventually, the family settled in West Lafayette, Indiana, where Golinkin’s sister was accepted into the Purdue graduate engineering program even though she, like her father, had been stripped of all credentials. Meanwhile, the author rejected every aspect of his former life, including his faith and language, and chose to go to a Roman Catholic college in Boston. Yet ironically, it was in this most un-Jewish of settings where he would begin the process of breaking through years of accumulated anger, pain and rage and accepting himself as a Jew. While the narrative becomes increasingly fractured near the end of the book, Golinkin still manages to impact readers with the force of his unflinching honesty.

A mordantly affecting chronicle of a journey to discover that “you can’t have a future if you don’t have a past.”