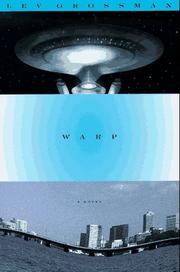 First novel from a twentysomething about twentysomethings in Boston. Star Trek aficionado Hollis went to Harvard, where he majored in Urban Studies. When asked what that is he says, ``I forget exactly. I think there was a large filmic component.'' He's a collection of clever remarks, and Grossman does not so much tell his story as take a snapshot of him during a time of indecision as he wanders through an evening and a night and a day in search of meaning. Hollis is a likable fellow, a smart-ass, though not malicious, always visualizing himself in Star Trek episodes; or as a noble knight-errant who must leave beautiful maidens behind as he goes off to serve the king; or as a brave little boy in a children's story, sailing out to capture a sea monster that has been terrorizing the village. Hollis is endlessly self-conscious, trying on different identities to see if one could possibly fit. In scenes with his friends, similarly educated and aimless, he offers some comic commentary, just as his idol, James Joyce, does in Ulysses. He has a sort of epiphany deep in the night, too: a meeting and quick sex with a punker named Xanthe. Then, during the day, he meets an old girlfriend, Eileen, who is actually working, and suggests that Hollis soon will be, too. And so he will, but not before more clever talk in bars, more hours before the tube, and some more daydreaming. Far gentler than Jay McInerney's Bright Lights, Big City. Despite the repeated references to Joyce, the style and subject here are far more reminiscent of the young Fitzgerald. Grossman can write, but sooner or later he'll have to find a subject.