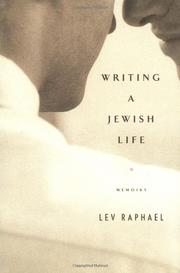 After traversing many different genres, from literary fiction (Dancing on Tisha B’Av, 1990) to academic mysteries (the Nick Hoffman series) and critical essays (Journeys and Arrivals, 1996), Raphael returns to nonfiction, drawing together 12 pieces about being a gay, Jewish writer.

The best essays are the first two, “Writing a Jewish Life” and “Okemos, Michigan.” Both were published in Journeys and Arrivals (“Writing” appeared under the title “To Be a Jew”), both have been widely anthologized, as is also true of several other pieces in the collection. Raphael fails to rework this disparate material into a seamless work of narrative nonfiction; indeed, he apparently couldn’t even be bothered to smooth out the transitions from essay to essay. In the first piece, for example, we read that one of his two stepsons is a Hillel director; a few pages later, the stepsons are in high school and college. In addition to such minor but jarring inconsistencies, the book’s other major problem is repetition. The fifth essay, “Writing Something Real,” rehashes the same themes as the title piece, and in many places, the two are repeated word for word. In both, Raphael explains that when he began to write, he avoided any mention of Judaism or the Holocaust. “My writing was as far away from myself as possible,” he tells us (twice), “and by that I mean as far away from my world, my own observations, my own truest knowledge.” Then, under the guidance of a college writing teacher, Raphael began to write a story that was honest and good. Now, in two essays, he exclaims, “I was terrified—I was alive.” To hear it once is great. Twice, it’s insulting. If we are going to take the time to read Raphael’s musings, can’t he take the time to revise and edit them?

An important writer with nothing new to say.