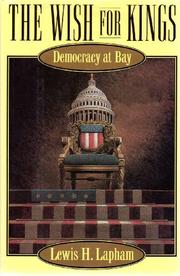 THE WISH FOR KINGS

The editor of Harper's and author of Imperial Masquerade (1990), etc., reaches the top of his form in five distinguished essays arguing that too few Americans any longer care or know enough to protect and nurture democratic institutions. ``[The] habits of liberty have fallen into disuse,'' writes Lapham, ``and the promise of democracy no longer inspires or exalts a majority of the people lucky enough to have been born under its star.'' America has devolved into an oligarchy, the argument begins—an argument buttressed with facts, figures, and observations—and the nation's collective frame of mind has changed as well over the past 30 years from that of ``democrat'' to that of ``courtier'': from a citizenry that understands government to be what the governed make of it to a citizenry that passively and obsequiously seeks favors and dispensations from the high and unresponsive powers that be. A numbing and closing down of democratic energies and freedoms of discourse is one result of such a situation, since ``[very] seldom does anybody hazard a guess or an opinion that might harm his or her chance of advancement,'' so that, even in the greatest universities, ``the range of acceptable opinion bears comparison with the wingspan of a bumblebee.'' Government itself (``a mock democracy'') is excoriated no less than is the ``chronic servility'' of American journalism in performing its ``duties as court chamberlain and archflatterer.'' And both are part of a nation trapped by a mass media whose vocabulary ``doesn't lend itself to the discussion of complicated political issues, much less to moral ambiguity or moments of doubt.'' The appeal of a candidate like Ross Perot was really the appeal ``of benevolent despotism,'' and Lapham's warning that ``the wish for kings is the fear of freedom'' takes on special power alongside his reminder that ``liberty withers and decays unless it's put to use.'' Eloquent, piercingly intelligent essays crying out against America's Orwellian future.