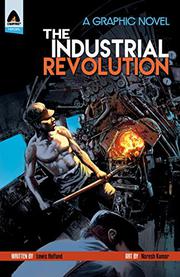 From the Campfire History series

Helfand brings a propulsive optimism to this graphic account of the Industrial Revolution.

Meet Johann Gutenberg, thinking, thinking, thinking big. “What if instead of copying text one word at a time… / …there was a way to reproduce entire pages?” Scribes took five years to copy the Bible. Helfand doesn’t mention the beauty of their work, but Gutenberg’s invention was revolutionary: more people received more news and knowledge. Readers follow Kumar’s clean panels as James Watt makes his entrance, then Eli Whitney, John Kay, Robert Fulton, Andrew Carnegie, Henry Ford. Helfand is mostly interested in the mechanical wizardry and tenacity of these inventers, which is slippery to capture: “About four times as much steel could be produced with Bessemer’s technique.” Helfand digs the book’s grave by half-heartedly tackling the social consequences. Readers learn that “countless skilled weavers suddenly found themselves out of work,” which is shrugged off: “But the inventions that cost the weavers their jobs were few and far between.” Except “as large landowners snatched up more and more farmland, small farmers found themselves out of work and eager for factory jobs.” Except: “Men and women were operating like clockwork; as efficiently as the machines that dominated the industrial age. The only problem was… / Ford’s employees hated it.”

The genesis of world-rocking inventions is often mysterious; their fate upon people not so much, here given a tantalizing if garbled peek, then left unexplored.