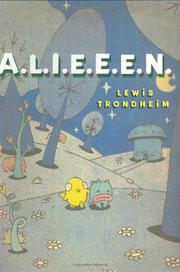 Designed to look like a weatherworn comic found in the woods, this outrageously imaginative graphic novel touts itself as the “first extraterrestrial comic book on earth.” Through a series of untitled nonlinear vignettes, the wide-eyed and seemingly innocent-looking alien characters embark on a series of adventures (and misadventures) that capture intrinsically human characteristics. In some episodes, bright, boldly colored cutesy aliens—who bear a toy-like resemblance—juxtapose violent situations, portraying both beauty and horror, in smart cohesion. Evincing the cruelties, the comedies and the oft-bizarre traits of the protagonists through an inventive and unique format, Trondheim distinguishes himself as a trailblazer in the youth graphic-novel market. Readers will be delighted by the wordless tale with its endearing, yet rascally alien characters and the sometimes crude plot that encompasses a variety of motifs, from invoking compassion to scatological humor. Not for the younger set, but an accomplished offbeat selection worth considering. (Graphic novel. 12-14)