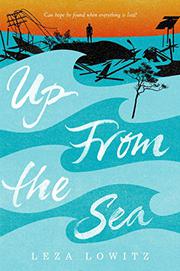 UP FROM THE SEA

Kai’s life is upended when his coastal village is devastated in Japan’s 2011 earthquake and tsunami in this verse novel from an author who experienced them firsthand.

With his single mother, her parents, and his friend Ryu among the thousands missing or dead, biracial Kai, 17, is dazed and disoriented. His friend Shin’s supportive, but his intact family reminds Kai, whose American dad has been out of touch for years, of his loss. Kai’s isolation is amplified by his uncertain cultural status. Playing soccer and his growing friendship with shy Keiko barely lessen his despair. Then he’s invited to join a group of Japanese teens traveling to New York to meet others who as teenagers lost parents in the 9/11 attacks a decade earlier. Though at first reluctant, Kai agrees to go and, in the process, begins to imagine a future. Like graphic novels, today’s spare novels in verse (the subgenre concerning disasters especially) are significantly shaped by what’s left out. Lacking art’s visceral power to grab attention, verse novels may—as here—feel sparsely plotted with underdeveloped characters portrayed from a distance in elegiac monotone. Kai’s a generic figure, a coat hanger for the disaster’s main event, his victories mostly unearned; in striking contrast, his rural Japanese community and how they endure catastrophe and overwhelming losses—what they do and don’t do for one another, comforts they miss, kindnesses they value—spring to life.

It’s the haunting details of those around Kai that readers will remember.