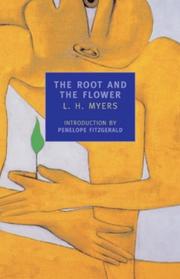 THE ROOT AND THE FLOWER

Published as three separate novels in the ’30s, Myers's trilogy was first brought together under one cover in England in 1985, along with a superb preface by the late Penelope Fitzgerald celebrating this "strange masterpiece." Myers (1881–1944), himself the son of a strange English parapsychologist, was clearly a seeker of the sort found in Maugham's Razor's Edge: a child of privilege who rejected the West on spiritual grounds, then converted to communism. Back in 1940, Kirkus (August 1, p. 339) speculated that readers "groping in today's disillusionment" would find Myers's "philosophical and metaphysical approach" appealing, if "specialized." The book itself, an imaginative re-creation of 18th-century India, prefigures the religious and political struggles of the modern period. But we also thought this dense story "difficult" "to appraise": as narrator, Myers "proves a disappointment," and "the physical plane" of his fiction " is slow and tenuous." Perhaps today's readers, weaned on Hesse and the spiritualists of the ’60s, will rediscover Myers's "brooding sense of mystery."