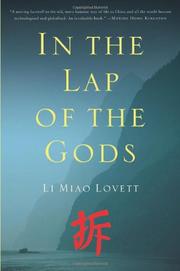 IN THE LAP OF THE GODS

In her first novel, Lovett chronicles the human cost of building China’s Three Gorges Dam on the Yangtze River.

Liu earns a meager livelihood scavenging the villages abandoned as the Yangtze rises. After finding a forsaken baby girl at the river’s edge, he approaches Fang, an entrepreneur who offers to help sell the baby to an orphanage. At the last minute Liu, whose beloved wife died while pregnant two years earlier, decides to keep the baby he calls Rose. With the help of an elderly neighbor, Liu learns to care for Rose. He also begins to court a waitress, Mei Ling, at the newly thriving restaurant of his friend Tai. Liu, Tai and Mei Ling all come from villages swept away by the dam’s creation. Mei Ling left her parents once they were relocated rather than be forced into an arranged marriage, but as a good daughter she continues to send money home. Tai plays matchmaker, throwing Liu and Mei Ling together as they work to open Tai’s new, larger restaurant. Mei Ling accepts Liu’s marriage proposal, but has difficulty adjusting to her new domestic life, in particular to the demands of feisty little Rose. When a job opportunity occurs in another city, she takes it and finds herself falling in love with her boss. Meanwhile Fang, who spent his youth in the countryside during the Cultural Revolution, hears from an old friend, Longshan, whose sister Sulin remains the lost love of Fang’s life. Rose is Sulin’s granddaughter. Fang approaches Liu to sell the child back shortly after Mei Ling asks for a divorce. Afraid of losing Rose and assuming he’s already lost Mei Ling, Liu leaves town with Rose to start a new life elsewhere without leaving a forwarding address. Fang’s love and submerged idealism mingle as he involves himself in Longshan and Sulin’s fight to receive compensation for their forced relocation.

A political opera written in an often flat, journalistic style, but Fang and Mei Ling are indelible characters.