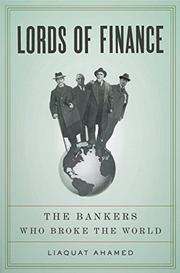 The Bankers Who Broke the World

Erudite, entertaining macroeconomic history of the lead-up to the Great Depression as seen through the careers of the West’s principal bankers.

Investment manager Ahamed sets the stage for his story with Toynbeean sweep. The gold standard, to which the major currencies of the world were tied, was thrown into tumult by World War I. France, Britain and Germany found themselves depleted of gold reserves. The United States, a new economic power holding the bulk of the world’s gold bullion, demanded repayment of loans made to its allies; this forced large, untenable reparation payments on Germany. The main characters of this unfolding drama were a quartet of bankers who saw themselves as “elite tribunes, standing above the fray of politics, national resentments, and amateur nostrums,” and who wielded astonishing, autonomous authority over monetary policy. Eccentric, aristocratic Montagu Norman of the Bank of England dealt with the problem of inadequate gold reserves to support the overvalued pound sterling by convincing Benjamin Strong, head of the Federal Reserve Bank of New York, to lower interest rates in America to encourage the flow of gold back to Europe. This directly fueled the U.S. stock-market bubble, Ahamed argues. The crash of 1929 and the worldwide depression that followed were the inevitable results. Other catalysts included the Reichsbank’s irascible, unpredictable Hjalmar Schacht, whose obsession with eliminating reparations led Germany to the brink of default, and vindictive Émile Moreau, whose policy at the Banque de France aimed to destabilize the British pound. Ahamed compares these bankers to the Greek mythological character Sisyphus, condemned to eternal, endless effort. “Their goal is a strong economy and stable prices,” he writes. “This is, however, the very environment that breeds the sort of overoptimism and speculation that eventually ends up destabilizing the economy.” Ahamed soberingly suggests that, “bubbles and crises seem to be deep-rooted in human nature and inherent to the capitalist system.”