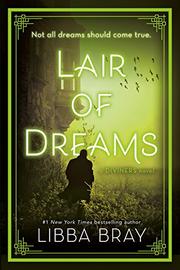 From the Diviners series, volume 2

Evie O'Neill, a young psychic fresh from a horrific experience with a serial killer in 1920s New York City, returns in this sequel to The Diviners (2012).

After going public about her abilities as a Diviner of the personal histories of others, Evie has rocketed into the limelight as the Sweetheart Seer, even garnering her own radio show. Her notoriety has driven a wedge between her and her uncle, whose occult museum is in dire financial straits, and it’s also forced her to fake a romance with smooth-talking Sam Lloyd for the press. Meanwhile, her friend Henry attempts to find the boy he loves, seeking help from Ling Chan, who, like him, is a dream walker, even as people all over the city fall prey to a mysterious sleeping sickness, for which Chinese-American residents are unfairly blamed. The ambitiously broad focus of this novel strikes just the right balance in its division of narrative might, developing each of the dizzyingly large cast of diverse characters with an impressive attention to detail and with period-specific, witty dialogue. Weaving together a chilling mystery with a truly elusive solution, several poignant love stories, agonizing injustice, terrifyingly monstrous dreams, and even a cameo by legendary psychiatrist Carl Jung, this installment wraps enough up to satisfy but clearly sets the stage for more.

How will readers stand the wait? (Historical/paranormal thriller. 14 & up)