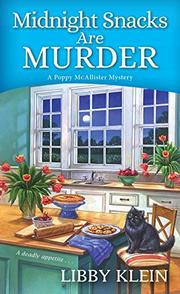 A widow’s return to Cape May, New Jersey, has been murder in more ways than one.

Poppy McAllister’s already been mistakenly arrested for murder upon her return for a high school reunion (Class Reunions Are Murder, 2018). Now her eccentric Aunt Ginny is in trouble. Poppy, who’d never planned to stay around, has invested time and money in a scheme to turn Ginny’s Queen Anne Victorian into a B&B using her considerable baking skills to help finance the project by selling her yummy gluten-free items at a local coffee shop. Her contractor, Itty Bitty Smitty, whose war cry is “I can fix that,” is behind schedule for their grand opening, and his running battle with Poppy’s controlling mother-in-law, Georgina, who’s invested just enough to have a say, frays everyone’s nerves. Then suddenly Aunt Ginny, who’s taking some new pills, starts sleepwalking and bringing home odd objects she’s pinched from neighbors’ homes while helping herself to desserts. So when Brody Brandt, one of the neighbors, is found murdered, the police arrest Ginny, aka the “Snack Bandit.” Poppy, who’s certain that Ginny is innocent, sets out to find the guilty party while she juggles two boyfriends, her former high school sweetheart Tim, a chef, and handsome Gia, who owns the coffee shop where she plies her goods. Unhappy with her body image, she can’t convince herself that either really desires her. As she digs into Brandt’s background, she discovers a number of possible motives. Now if she can only keep Ginny out of trouble while she tracks down the real killer.