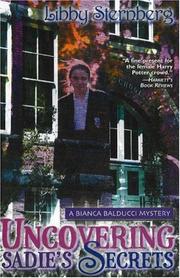 Publicized as the first in a series of mysteries featuring Bianca Balducci, 15-year-old high-school sleuth, this effort from first-time novelist Sternberg should satisfy mystery lovers, though it will likely annoy forward-thinking young women. High-school sophomore Bianca confines most of her attention to attracting Doug, whom she hopes will become her first official boyfriend, until Sadie Sinclair suddenly arrives in her school. Sadie exudes mystery. She dresses like an extrovert, yet appears to be shy, and is pitifully happy when Bianca and the other girls accept her as a friend. She’s supposed to be only 15, yet she drives a car. Consumed with curiosity about Sadie and with hero-worship of her older sister Connie, a private detective, Bianca decides to investigate the strange new girl. What she discovers puts herself and Sadie into serious trouble, as well as continually interfering with Bianca and Doug’s romantic progress. While Sternberg emphasizes mystery and action elements, she doesn’t ignore deeper issues. She portrays Bianca as someone who genuinely cares about Sadie even while digging into Sadie’s past, rationalizing her actions with the idea the she’s really helping the girl. Too much moralizing at the end helps to tidy up Bianca’s growth experience, but the emphasis remains on mystery and suspense. It’s an extra entertainment for mystery fans, one for those who want a puzzle without a ghost or a murder and who don’t mind the retro girl stuff. (Fiction. 12-16)