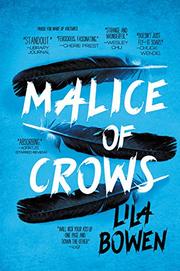 A tale of magical battles set on the frontier of a Western world beset by monsters.

Rhett Walker’s first fight with the necromancer Trevisan nearly killed him. But now the magician has stolen the body of Meimei, the younger sister of Rhett’s new companion, Cora, who’s pretty adamant that their little band ought to be chasing after him. Except Rhett has a destiny—he’s the Shadow, and he has to follow the “unwelcome twinge in his belly” that points him to “where the world demand[s] to be set right.” The rest of Rhett’s group of friends and followers—Cora; Earl, the ornery Irishman who can shift into a donkey; the coyote shifter Dan and his sister, Winifred; and Sam Hennessy, whose feelings about Rhett are as complicated as Rhett’s for him are pure—will just have to accept it. He has to follow where the Shadow leads. And the Shadow, inevitably, leads him and his friends straight into danger. This third book in Bowen’s (Conspiracy of Ravens, 2016, etc.) Shadow series picks up right where the last volume left off, and the pace of the band’s adventures never lets up. Rhett is an appealing hero, gruff and prickly on the surface, with deep feeling poorly hidden underneath, and his friends are complex, well-drawn characters. The stakes couldn’t be higher, and the story couldn’t be more absorbing.

Fans of the Shadow will love returning to his world, and fantasy fans who haven’t yet encountered this colorful cowboy should hurry up and dive in.