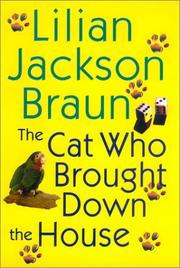 THE CAT WHO BROUGHT DOWN THE HOUSE

Is the world of Prokofiev’s opera The Gambler full of “scandal, intrigue, falsity, and greed,” really, as millionaire columnist Jim Qwilleran observes, “just like Pickax”? Well, yes and no. Ancient Moose County native Thelma Thackeray’s return from Hollywood to her hometown to have some unspecified fun before she dies has tongues wagging, though the issues are whether she was really a movie star and whether she’s going to turn the old opera house into a film club. Intrigue? Maybe the death of Thelma’s twin brother, beloved veterinarian Thurston Thackeray, in a hiking accident last year wasn’t so accidental. As for falsity and greed, somebody clearly kidnapped Thelma’s five prize Amazon parrots the very night she arrived in town, and since her nephew Richard got them back only by making a ransom payment, somebody’s obviously sitting on a heavy purse. But these readily solved crimes against humanity and the animal kingdom are matters of less urgent concern than the rambling reminiscences Qwill is collecting for his volume Short and Tall Tales, the lovingly detailed meals he shares with librarian Polly Duncan and other series regulars, the sleuthing shenanigans of his Siamese Koko and Yum Yum, and the columns that prove repeatedly that he can write a thousand words about nothing—a gift his veteran author displays on a larger scale herself.

The smidgen of mystery will be just enough for the faithful already queued up for this mild silver anniversary for Braun.