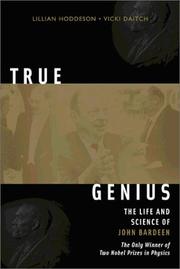 The Life and Science of John Bardeen

Serviceable biography of the Nobel Prize–winning physicist who invented the transistor.

Part of a Bell Laboratories team that included the later-to-be-controversial William Shockley and Walter Brattain, Bardeen (1908–91) had a gift for decomposing large problems into smaller, more easily soluble ones; faced with the challenge of developing a superconductor amplifier more reliable than the then-standard vacuum tube, he drew on his knowledge of quantum mechanics, chemistry, and mathematics to formulate an elegant theory of surface states that made the development of the transistor practicable. His subsequent work in problems of superconductivity was of material importance in the development of information technologies that are commonplace today. Bardeen’s role in the invention of the transistor, which occupies much of this narrative, is the subject of Hoddeson’s Crystal Fire: The Birth of the Information Age (with Michael Riordan, 1997), and readers of that study will find little new here. With co-author Daitch (a former student of Hoddeson’s at the University of Illinois, where Bardeen also taught), she adds a more fully rounded biography of Bardeen that emphasizes his family background and, well, ordinariness, often by providing exquisitely mundane details (“The Bardeens’ house in Summit was their first major financial investment. A comfortable Dutch colonial at 5 Primrose Place, it featured a sun porch, cellar, and detached garage”). This emphasis on Bardeen’s ordinary-Joe qualities—he loved to play golf and spend quiet time at home—the authors put to use in a curious disquisition on the nature of creativity and genius. Must one have funny hair like Einstein’s or play bongos like Feynman to be considered brilliant? Evidently so, they suggest, even while making a straw-man case for Bardeen as a bona fide brainiac who deserves to be better known—an assessment readers of this slow biography will not likely dispute in any event.

Of some interest to historians of science and to students of the creative process, of which scientific thought is surely a part.