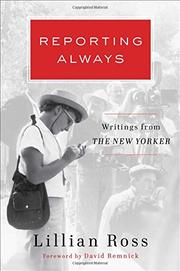 Writings from the New Yorker

An anthology of New Yorker stories form a living bridge to journalism’s golden age—which, as it happens, wasn’t all that long ago.

Ross, no relation to legendary editor Harold Ross, began working at the magazine in 1944. She was paid less than any male counterpart, but she was lucky to have the job, since said editor had a strong aversion to women reporters to begin with and hired them only when World War II took the men away to battle. Ross the reporter had a less frightful mentor in managing editor William Shawn, who paid her the same as the men and stuck up for her when she turned in a controversial piece about the Miss America contest, open to all young women who were “high school graduates, were not and had never been married, and were not Negroes.” Score one for the author, who closes her introduction with an old-fashioned manifesto that many modern practitioners will ignore or puzzle over—to wit, write only about people who want to be written about, and don’t use what she charmingly calls a “tape recorder.” Some of the entries have a fustiness that cannot survive the passing years, and some are nearly parodic in sounding just like what a New Yorker human-interest piece is supposed to sound like: “Eastwood’s appearance in the kitchen, where Paco the parrot greeted him with repeated I love yous, didn’t seem to slow down the lunch preparations that were under way.” Some are classics, however, including her much-anthologized piece on John Huston’s travails in making the 1951 film The Red Badge of Courage. It’s worth noting that Ross is writing for the magazine today, though the anthology tilts heavily in favor of work that appeared before anyone ever heard of Tina Brown or Jill Lepore, the latter of whom Ross singles out for praise.

Readable and rewarding and, though more than a touch old-fashioned, full of exemplary reporting.