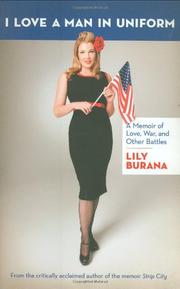 I LOVE A MAN IN UNIFORM

A Memoir of Love, War, and Other Battles

A journalist and ex-stripper marries a career Army officer.

After a chance meeting and whirlwind romance, Burana (Try, 2006, etc.) married Mike, a major in the U.S. Army. Though they were an odd couple—a former exotic dancer who wrote a bestselling book about her adventures (Strip City, 2001) and an all-American hero who devoted his life to the military—Burana willingly joined the sisterhood of women whose husbands serve their country in uniform. She learned what this meant when Mike was deployed to the Middle East as the Iraq War began. She coped with the fear and loneliness that accompany having a loved one in harm’s way. She was awed, and intimidated, by the way other military wives kept home and hearth together. She was confused when Mike returned from duty different. On to West Point, whose arcane rituals and rules, both written and unwritten, Burana describes in hilarious detail. Despite her unorthodox—and what she feared some would see as sordid—past, she found peace among the soldiers and spouses of West Point. Until, following her father’s death, depression hit her like a guided missile. Then the marriage that had sustained her began to suffocate her; the life of an Army spouse that had challenged and bemused, now terrified; and all she wanted was a way out. She left Mike and embarked on a battle to understand the posttraumatic stress that afflicted her and the memories of childhood abuse at the hands of a babysitter that haunted her. Mike learned he could not fix Burana, as was his Army can-do inclination, but could only love her. After many struggles, achingly delineated in beautiful prose, they reconciled and resumed their life at the Academy. Moved by the kindness and understanding other Army wives showed her, Burana determined to repay their kindness. How she did so was appropriately outrageous—and too funny an ending to give away.

One of those rare memoirs that both teach and make us laugh.