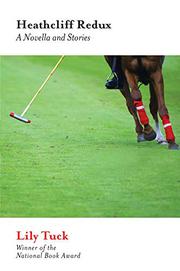 National Book Award winner Tuck (The Double Life of Liliane, 2015, etc.) turns her attention to Emily Brontë's gothic, psychologically riveting Wuthering Heights in Heathcliff Redux, the novella at the center of this collection.

It's 1963 in rural Virginia, and the unnamed narrator, who's a mother and the wife of a cattle farmer, is rereading Wuthering Heights when she finds herself inexplicably drawn to a morally compromised man named Cliff. Although warned that Cliff is "too good-looking for his own good," "reckless," and untrustworthy, the narrator falls hard. The story of their affair unfolds as collage: Interspersed with passages from Wuthering Heights, snippets of Brontë's biography, and critical commentary on the novel, the narrator reports in short dispassionate sections on the places she and Cliff make love, on Cliff's lies, and on her husband's affair, among other things. Places or things that arise in scenes from Wuthering Heights or the narrator's own story (Rehoboth Beach, cuckoos, Boeuf Bourguignon) are sometimes glossed on the next page, underscoring the extent to which facts are not necessarily truths. Though the narrator is looking back (much of the secondary material was published 30 years after the affair), hindsight doesn't help her understand why she allowed Cliff to become the force of so much destruction. Instead, the human heart remains a mystery, which seems to be the point. This may disappoint readers who expect fiction to explore the reasons for characters' actions or the novella to shed new light on Brontë's novel (or vice versa). The final four stories are both stranger and more conventional. The characters do things surprising (like carrying a dead swan home) and shocking (murdering a teenage girl), and yet the past always catches up with the present, emphasizing the age-old belief—and plot of much fiction—that you can't escape the consequences of your actions.

Lean, intriguing, formally innovative prose that will satisfy some readers while leaving others hungry for meatier plots.