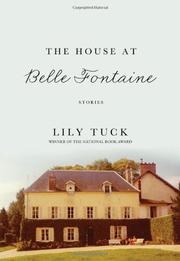 THE HOUSE AT BELLE FONTAINE

Death haunts this dark collection of 10 stories from Tuck (I Married You for Happiness, 2011, etc.).

Ella is an American divorcee raising her children in France in the title story. She’s a tenant on the estate of one of the richest (and oldest) men in the country. Her arrival coincided with a horrendous plane crash nearby; hundreds died. Ella has been summoned to dinner with her landlord on a cold winter’s night: The story is suffused in existential dread. That same dread affects Maud in "Ice." She and husband Peter, retirees, are on an Antarctic cruise. Peter’s nighttime disappearance, re-awakening her old fears, is far more frightening than the surrounding icebergs. "Lucky" is more complicated. Six characters’ lives intersect; the model is the play/movie Six Degrees of Separation. An alcoholic crashes his car and dies; that’s the heart of a story remarkable for its technical expertise. That expertise is also evident in "Sure and Gentle Words." It begins with a German professor’s mysterious and fatal fall from a train in 1911, touches lightly on two momentous sexual encounters and one world war, and ends some 20 years later with the professor’s son interpreting that fall in his film. Dislocation is a recurrent theme. An American couple discovers that going native in Thailand can have a boomerang effect: It’s not pretty. ("Bloomsday in Bangkok"). "Pérou" offers a more extreme example of cultural dislocation. A young French nanny travels with her employer to South America in 1940 to avoid the war. Her fate there seems almost gratuitously cruel. There’s nothing cruel about Chingis in "The Riding Teacher," though he’s a descendant of one of the great killer conquerors of history, Genghis Khan. All that this gentle, unhappy man has inherited is superb horsemanship. Leave contemporary cruelty to Mark, the unfaithful husband in "My Flame," who takes shocking advantage of his vulnerable niece in a story that burns with a wicked flame indeed.

Impressive work from a virtuoso.