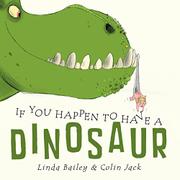 IF YOU HAPPEN TO HAVE A DINOSAUR

A tongue-in-cheek look at some of the many ways that idle household dinosaurs can be put to work.

Jack casts a host of cartoon dinosaurs—most of them humongous, nearly all smiling and candy bright of hue—in roles as can openers, potato mashers, yard sweepers, umbrellas on rainy days, snowplows, garbage collectors, and like helpers or labor savers. Even babysitters, though, as Bailey aptly notes, “not all dinosaurs are suited to this work.” Still, “[t]he possibilities are amazing!” And even if there aren’t any handy dinos around, she concludes, any live-in octopus, sasquatch, kangaroo or other creature can be likewise exploited. A bespectacled, woolly-haired boy who looks rather a lot like Weird Al Yankovic serves as dino-wrangler in chief, heading up a multiethnic cast of kids who enjoy the dinosaurs’ services. As with all books of this ilk, the humor depends on subtextual visual irony. A group of kids happily flying pterosaur kites sets up a gag featuring a little boy holding a limp string tied to the tail of a grumpy-looking stegosaurus. Changes on this premise have been run over and over since Bernard Most’s If the Dinosaurs Came Back (1978), and though this iteration doesn’t have any fresh twists to offer, at least it’s bright and breezy enough to ward off staleness.

Well-trodden dino turf, but the grass is still fairly green.