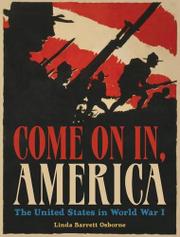 COME ON IN, AMERICA

The United States in World War I

A wide-ranging exploration of World War I and how it changed the United States forever.

Students who know anything about history tend to know other wars better—the Civil War, World War II, Vietnam. But it was World War I that changed America and ushered in a new role for the United States as a world political and economic leader. Two million Americans were sent to the war, and in the 19 months of involvement in Europe, 53,000 Americans were killed in battle, part of the staggering total death toll of 10 million, a war of such magnitude that it transformed the governments and economies of every major participant. Osborne’s straightforward text is a clear account of the war itself and various related topics—African-American soldiers, the Woman’s Peace Party, the use of airplanes as weapons for the first time, trench warfare, and the sinking of the Lusitania. Many archival photographs complement the text, as does a map of Europe (though some countries are lost in the gutter). A thorough bibliography includes several works for young readers. A study of World War I offers a context for discussing world events today, so this volume is a good bet for libraries and classrooms—a well-written treatment that can replace dry textbook accounts.

A slim volume big on historical information and insight.