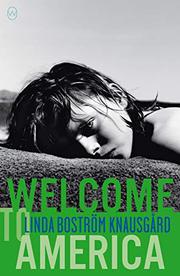 A girl gives her dysfunctional family an extreme and distressing version of the silent treatment.

Ellen, the narrator of the second novel by Boström Knausgård and first published in the U.S., is certain she’s killed her father, because she constantly prayed for his death. “I had access to God. It was me and God who’d killed my dad,” she tells us early on. That line is more than enough reason to fire up the “Unreliable Narrator” siren, but Boström Knausgård encourages the reader not to dismiss her situation as madness but empathize with it as trauma. Ellen's mentally ill father has been institutionalized and may have tried to kill the family by leaving the gas on; her brother is angry and abusive; her mother, an actress, is distant and narcissistic. (The title refers to her in a role as a “fallen Statue of Liberty.”) In that light, Ellen’s silence (and this book) represents a protective carapace against an adulthood she associates with pain: “I stopped talking when growing began to take up too much space inside me. I was sure I couldn’t do both, grow and talk at the same time.” The mood intensifies as Ellen’s mother and brother pursue their own relationships, but the novel doesn’t have an arc so much as a set of fuguelike variations on Ellen’s musings about death and loss. Boström Knausgård’s writing (via Aitken’s translation) is crystalline and careful; like her ex-husband, Karl Ove Knausgård, she has an eye for quotidian but revealing details, though she eschews his expansiveness. Here, restraint and ambiguity prevail, whether it’s about the intensity of the abuse Ellen sustained or the veracity of her assertions. Regardless, it’s a taut portrait of how difficult it can be to reconcile ideals about faith and family with their messier realities.

An intense, recursive book that evokes the chill despair of a Bergman film.