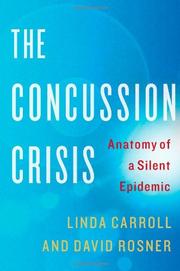 Anatomy of a Silent Epidemic

by Linda Carroll and David Rosner

MSNBC.com and New York Times health writer Carroll and former Newsday and Neurology Now reporter Rosner examine the concussion epidemic as a “major public health crisis,” noting that many of these cases go ignored only to reemerge in adulthood as early-onset Alzheimer’s disease or dementia, as in the case of boxing legend Sugar Ray Robinson. The authors reinforce their assertions with numerous case histories involving young athletes like teenaged football hopeful Dave Showalter, whose raw potential was stunted by the cumulative effects of repeated head injuries. More recognizable victims include NFL gridiron heroes Troy Aikman, Al Toon and Steve Young, and hockey stars Eddie Shore and Pat LaFontaine—all of whom were forced into early retirement as a result of concussive brain damage. Carroll and Rosner spotlight the expansive reach of the syndrome by including female athletes equally susceptible to the malady, car-accident victims, a 13-year-old football player who suffered catastrophic injuries from a solitary event, military soldiers in Iraq and the coaches and professional athletic leagues who, under pressure from players, parents and the industry at large, brush off these potentially life-threatening wounds. Though the personal profiles vastly outnumber chapters on remedies, they are consistently intriguing and alarming, accentuated by brain-injury particulars, scientific and medical statistical data and clinical studies by leading concussion experts like Dr. Robert Cantu, who, after two decades of research, published defined guidelines on the duration athletes should be sidelined after a concussive event to prevent permanent damage from “second-impact syndrome.” The authors argue that while positive change is underway with heightened awareness from NFL teams and elsewhere, the majority of concussions still go undiagnosed and that education remains the best defense against this “invisible injury with subtle symptoms that often seems to pass quickly.”

A cautionary wake-up call about addressing a seemingly innocuous hit to the head with critical care.