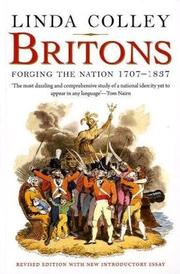 A superb history of how British nationalism and patriotism developed in the period before the accession of Queen Victoria; by Colley (History/Yale). Britain at the beginning of the 18th century, says Colley, ""was like the Christian doctrine of the Trinity, both three [England, Scotland, and Wales] and one and altogether something of a mystery."" It comprehended a ""massive diversity,"" but, during the next century, a united kingdom was forged--under the influence of an embattled Protestantism (the Counter-Reformation was in progress, and fear of the Stuart claimants to the throne remained vivid during this time); war (for long periods, with France); and growing trade and imperial hegemony. The loss of the American colonies was, in Colley's view, perhaps more constructive than Britain's victories, precipitating an enthusiasm for parliamentary and imperial reform and for religious liberalization in a governing elite that realized the extent of the threat it faced as a result of that los& This elite soon recognized, moreover, that it needed more than passive obedience in order to triumph over the French during the Napoleonic Wars. Colley notes that Catholic Emancipation, parliamentary reform, and the freeing of slaves throughout the empire were attributable in remarkable measure to popular pressure. By 1832, Britain was the most democratic country in Europe, and its moral stature contributed to the relatively tranquil period that ensued during the rest of the Victorian era (though, paradoxically, Britain was outpaced in democratic commitment by many other European countries well before the end of the 19th century). Intelligent, lively, well written, bursting with ideas, and splendidly illustrated with 70 prints and cartoons from the period.