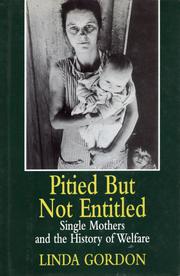 PITIED BUT NOT ENTITLED

Single Mothers and the History of Welfare

A scholarly but resonant analysis of ``the cultural meanings of the welfare system,'' probing the mistaken assumptions behind fundamental policies forged during the 1930s. Beginning in 1890, writes Gordon (History/Univ. of Wisconsin), single mothers were portrayed as a symptom and cause of social decay; unlike today, however, the situation was seen as a temporary misfortune that usually befell white immigrants, often widows. Middle-class women's groups helped to create ``mother's aid'' for the deserving poor; the author calls this policy (a forerunner of the current Aid to Families with Dependent Children, or AFDC, program) ``maternalist,'' rooted in the subordination of women in domestic roles. But there were other points of view: Black women activists, notes Gordon (Woman's Body, Woman's Right, 1976), had less distance from those they wished to aid; they emphasized universal education and health programs rather than charity. The thinkers behind Social Security, all white and nearly all male, focused their lens on money and jobs for men, even though they knew it was a fallacy to consider men the sole supporters and protectors of women. During the New Deal, social movements ``valorized'' the elderly and unemployed, ignoring single mothers; the women's movement was quiet, and the lack of African-American political power meant that blacks' views on welfare were ignored. Gordon argues that the Social Security Act of 1935 created generous programs for the elderly and unemployed that operated under a single, federal standard; she cites a range of factors, including accommodations for southern employers and bureaucratic infighting, leading to the stratified, state-administered Aid to Dependent Children (later AFDC). Gordon doesn't enter the current policy debate, but she does note trenchantly that in order to fight inequality we must make such entitlements as corporate tax breaks and home mortgage deductions as ``visible as welfare.'' The arguments get complicated, but this is challenging history—and a goad to clarify modern-day rhetoric.