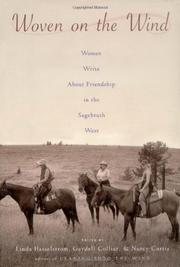 WOVEN ON THE WIND

Women Write About Friendship in the Sagebrush West

From the editors of Leaning into the Wind (1997), an anthology of women’s poems and essays that celebrate friendship in the High Plains, where winter comes early and distant neighbors become family.

Some of these pieces are by published writers, others are first efforts; some are about remarkable relatives, others about unlikely strangers who changed their lives—but all share a love for the place itself, the life lived there, and the friendships that have sustained them. “Here we form friendships that we expect to last the rest of our lives,” observes Shannon Dyer. This is not Starbucks territory: these women train horses, deliver calves, and hike high mountain trails. They know how to handle guns as well as write poems. Many are ranchers, wives, or daughters of ranchers, and they live on the land that stretches from Alberta to the Mexican border. They make chokeberry jam together, get together for a girls’ night on the town, and go deer hunting together. Some, like Dorothy Blackcrow Mack, recall the lessons they learned from older women such as her Black Crow mother-in-law Emma (who taught her how to pick sage for the sweat lodge, butcher cattle, and cook native dishes like “puppy soup”). Betty Downs recalls how the stories of Ione (who as a young shepherdess “learned how to be lonely”) helped her as a new bride. Many recall friends who died, mothers who suffered from mental illness (counseling programs didn’t exist in rural towns in the 1940s), and the closeness of family life. Susan Austen and Laurie Kutchins eloquently describe the spirit of a land where “the wind clicks across the emptiness . . . winter shakes its body over the bare and lovely hills,” and friendship is “forged out of its drifts, its dust and mud and shadows.”

Vivid evocations of a place, its women, and how they live.