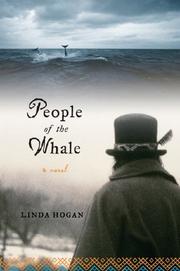 PEOPLE OF THE WHALE

The latest from Pulitzer Prize finalist Hogan (English/Univ. of Colorado; Power, 1998, etc.) revolves around two Native Americans of the Pacific Northwest as they struggle to reconcile the tribe’s time-honored ways with those of the corrupt wider world.

Thomas Just and Ruth Small seem destined for each other. His grandfather is Witka, legendary hunter-seer who in times of need disappeared into the depths and “spoke with the whales, entreated them, and asked […] if one of them would offer itself to the poor people on land.” Ruth, meanwhile, is born with gill slits and kept briefly in a zinc tub so she won’t “drown in air.” But soon after they’re married in a tribal ceremony, Thomas—on a bender with friends—impulsively enlists and ships off to Vietnam, leaving behind not only Ruth but, it turns out, the son she’s pregnant with. Horrified by what he witnesses in war, Thomas melts into the landscape of Vietnam, where he lives ten years as a rice farmer, even fathering a daughter. He returns to the States—but not home, not yet. After a sojourn in Hawaii, he hears the tribe is to embark on a whale hunt. Ostensibly a reassertion of traditional values, it’s actually a cynical scheme, with the whale oil promised to profiteers; this whale will be not entreated but slaughtered. Thomas takes part in the hunt, during which his estranged son is murdered. (Gifted with some of his great-grandfather’s ability, Marco tries to dissuade his fellows from killing a whale too small and timid, and pays with his life.) Thomas withdraws to taciturn solitude in his grandfather’s house, and Ruth courageously tries to punish the wrongdoers and uphold the old ways. Hogan excels, early on, in laying out tribal lore, and the book nicely exemplifies the difficulty of maintaining A’atsika values in a world grown smaller, more venal, more violent. But the abstract, preachy voice palls, and Thomas remains elusive, more symbol than person.