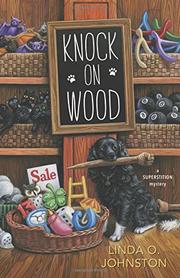 A newcomer to a town obsessed with luck tries to solve the murder of her friend’s suitor while keeping her fingers crossed.

Though some think her past run-ins with danger have been bad luck, Rory Chasen is determined that moving to superstition-obsessed Destiny, California, will give her a charmed life. Sure, she got tied up with a murder as a new resident of the town, but that’s all in the past. Now she’s lucked into the perfect job selling pet wares at the Lucky Dog Boutique, and she’s even got a lucky black-and-white pup, Pluckie. Rory hopes her good luck will rub off on her friend Gemma while the latter is in town. It’s not that Gemma is typically plagued with bad luck, but she’s struggling to get over a recent breakup with fellow librarian Frank. Rory’s not sure she can be any help in the romance department—she’s been a mess since she lost her fiance—but she’s hoping to lift Gemma’s spirits in other ways. In any event, Gemma doesn’t seem to need Rory’s help with romance because after only a few days in town, she’s the focus of multiple potential suitors. Unfortunately, one of these is Frank, who’s turned up uninvited and unwanted. The misfortune doesn’t stop there, for Rory and Pluckie soon come upon the body of another of the men interested in Gemma. Both Gemma and Rory are potential suspects, and the citizens of Destiny wonder if either of them could be bad luck. Rory just hopes for the chance to redeem herself to Police Chief Justin Halbertson, not simply as an innocent party, but maybe as something more personal.

Although Johnston (Bite the Biscuit, 2015, etc.) is as heavy-handed with references to luck as the Destiny citizens are in seeding their sidewalks with heads-up pennies, the over-the-top characterization works.