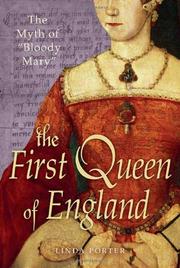 THE FIRST QUEEN OF ENGLAND

The Myth of “Bloody Mary”

Brisk, learned reassessment of Mary Tudor, whose short reign featured beheadings and burnings, but also political and social reforms for which she has never received proper credit.

A former university lecturer, Porter debuts with a difficult assignment: painting a gentler expression on the grim visage traditionally given to “Bloody Mary.” The author pinpoints several factors in what she sees as a historical injustice. The first is Acts and Monuments, John Foxe’s graphic, wildly popular account of Protestant martyrs’ sufferings during Mary’s attempts to restore England to Roman Catholicism. Centuries of male Protestant historians have tended to follow the general line of Foxe’s book, in print ever since it was first published in 1563. It didn’t help Mary’s reputation that her turbulent years as queen (1553–58) were immediately followed by half-sister Elizabeth’s much longer and admittedly more glorious reign. Porter champions her subject with sturdy determination and fixed focus. She revisits Henry VIII’s long marriage to Katherine of Aragon, Mary’s mother, and the failure to produce a male heir that prompted Katherine’s repudiation and Henry’s break with Rome. She deals with the short reign of Mary’s half-brother Edward VI and examines the mercurial relationship between Mary and Elizabeth. She explores the political marriage between Mary and Philip II of Spain, who did his marital duties but eagerly escaped to the continent whenever he could to avoid his older and not very alluring wife. Porter argues that the queen did not want to restore medieval Catholicism, even though the burnings at the stake of Thomas Cranmer and nearly 300 others suggest the contrary. The author credits Mary for encouraging the arts, insisting on better education for the clergy, initiating some fiscal reforms and being true to the religion whose verities she never questioned.

Properly accentuates this much-maligned queen’s achievements, but not always convincing when trying to explain away her failures.