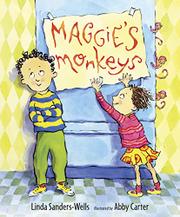 A family of pink polar monkeys has moved into the refrigerator, and Maggie’s older brother cannot fathom why the entire family is catering to the imagination of his still–thumb-sucking younger sister. But no one will listen to his protests, and Mom simply says, “Sometimes it’s hard to know what’s real.” When he can’t beat them, he joins them, but his imagination is just not up to Maggie’s standards. However sick of monkey business he is, though, when his friends threaten his sister’s peace-of-mind, he become Horton-like and protects both the pink monkeys and his sister. In her children’s debut, Sanders-Wells wonderfully encapsulates the difficulties of being a middle child—simultaneously too old and too young. Carter’s masterful facial expressions reflects this inner battle. Her gouache artwork is done in a bright, tropical palette that emphasizes the imaginative theme. While pink polar monkeys may not exist, what is very real is the love and loyalty of a big brother. A humorous tale sure to make siblings smile, even as they inwardly groan. (Picture book. 3-8)